One of the short stories I chose for discussion in a Great Books Discussion class a year or two ago was “Where Are You Going, Where Have You Been?” by Joyce Carol Oates.  Oates based the story loosely on an article entitled, “The Pied Piper of Tucson” written by Don Moser for Life magazine in 1966.  I found Moser’s article in a recent book entitled True Crime: An American Anthology edited by Harold Schechter, and published by The Library of America.  It’s very interesting to read the true story, and then to see what Oates did with it in her short story.

In the same book I found a story about the murder of a woman who was nicknamed “The Black Dahlia.”  Jack Webb, better known to us as Sergeant Joe Friday from the early days of TV, included the details of this grisly case in a book he wrote in 1958, The Badge: True and Terrifying Crime Stories That Could Not Be Presented on TV, from the Creator and Star of Dragnet.

Shortly after its publication a young boy, whose mother had recently been murdered, received a copy of Webb’s book for his eleventh birthday.  He found the story of “The Black Dahlia” particularly fascinating for obvious reasons. When this boy, James Ellroy, became a man, he wrote a novel, The Black Dahlia (1987), based on Webb’s account of the “Dahlia” murder, and it became his first big hit.  Like Oates, Ellroy took a gory story with sketchy details, and imagined what might have happened before and after the murder.   Ellroy went on to write a number of other popular crime novels including The Big Nowhere, L. A. Confidential, and White Jazz.  Incidentally, True Crime also includes “My Mother’s Killer,” James Ellroy’s account of his mother’s still unsolved murder.

True Crime presents the writings of a remarkable variety of figures (literary and otherwise) including Truman Capote, Mark Twain, Nathaniel Hawthorne, James Thurber, Zora Neal Hurston, and even Abraham Lincoln.  The cases stretch back to the first recorded murder among the pilgrims (as reported by one of the pilgrims), and go forward to Dominick Dunne’s account of the gruesome murder of Kitty and Jose Menendez by their sons Lyle and Erik.  If you enjoy crime stories I think you will find True Crime endlessly fascinating. 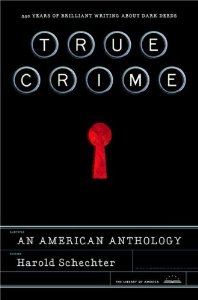