Readings I’ve Enjoyed – The Story of Civilization by Will Durant

Though you may never have heard of Will Durant, he is responsible for introducing millions of people to the pleasures of philosophy and history.  His 1926 book The Story of Philosophy has sold millions of copies, and his 50 year project to tell our history in a way that mere mortals would find captivating resulted in the publication of eleven extremely popular volumes called The Story of Civilization.  The first volume, Our Oriental Heritage, was published in 1935, and the last, The Age of Napoleon, was published in 1975 when Durant was 90 years old.  Volume 10, Rousseau and Revolution, which he coauthored with his wife Ariel, won the Pulitzer Prize for General Non-Fiction in 1968.  And in 1977 he and Ariel received the Presidential Medal of Freedom.  To me his writing style is what made the books so interesting an accessible.  Historians tend to dismiss Durant, but the public snapped up each new volume he produced – some over 1, 000 pages long – because the books were sure to be both informative and interesting to read.  In fact the Book-of-the-Month Club offered the set as an enticement to join for many years and distributed countless sets for almost nothing.  That’s how I got my set.  Between single volumes and sets, the Book-of-the-Month Club has distributed over 9 million copies of Durant’s works.

The beautiful love affair between Will and Ariel began in 1912 when Will, aged 28 and a teacher at a progressive school, fell in love with and married his 14 year old student Chaya Kaufman who he called Ariel after the sprite in Shakespeare’s The Tempest.  Their love story ended in 1981 when, believe it or not, they died within two weeks of one another.  When Will went into the hospital, Ariel refused to eat and died.  Though the family tried to keep Will from finding out, he learned of Ariel’s death on a TV newscast, and he died shortly thereafter. 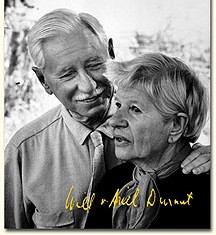 At my Readings I’ve Enjoyed page you will find two excerpts from Caesar and Christ the third volume in Durant’s The Story of Civilization set.  After reading these paragraphs I think you will understand why his writing has been – and still is – so popular.  You can find out more about Will Durant here.

This entry was posted in Books, Readings I've Enjoyed. Bookmark the permalink.