Can you make money by selling books for a penny each? Yes, you can if you sell them on Amazon, and if you’re penny wise.

The American Library Association (ALA) has just released its list of the ten most banned or challenged books of 2014.

We consider certain things written by authors in the past to be objectionable – racist, insensitive, or perhaps thoughtlessly hurtful of particular nationalities or groups of people.  What will readers find objectionable in a hundred years that today’s authors and readers find perfectly acceptable today? 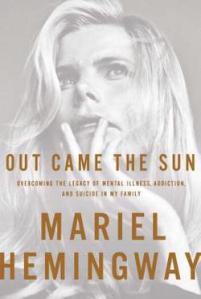 In a recent post, “Writers Under the Influence,” I talked in part about Ernest Hemingway’s alcoholism and the history of suicide in his family.  Mariel Hemingway, granddaughter of Ernest and sister to Margaux (who also committed suicide), talks about the family curse in a new book entitled Out Came the Sun.  The Daily Beast has a synopsis of it here.  She also wrote a book on the same subject for teens and young adults entitled Invisible Girl.

Laura Ingalls Wilder’s annotated biography, Pioneer Girl, is HOT!  But the story of her life in Pioneer Girl sometimes clashes with what she wrote in her Little House on the Prairie series.  Find out why in a Washington Post article.

The Hubble telescope has been taking pictures of the vast universe for 25 years, and the images are awesome.  Mashable has some samples that are breath-taking.

Neil deGrasse Tyson, the astrophysicist who recently hosted an updated version of Carl Sagan’s popular Cosmos TV series, is now hosting a late-night talk show on the National Geographic channel.  But will it work?  Does anyone care about science?  According to a Time magazine article, science is “in” again.

Tyson has hosted a talk show about science on radio for a while.  You can listen to past episodes here.

Will physical books disappear one day?  We bibliophiles doubt it.

The publishing industry is in the doldrums, and some people are calling for the return of the serial novel.  It worked for authors such as Charles Dickens, but could it work today?

Mousehold Words, a website mentioned in the article. has made a few novels available in their original serial form.

The next edition of the live author interview program In-Depth on Book TV (C-SPAN2) will air Sunday, May 3, 2015 from noon to 3:00 p.m. ET.  The featured guest will be author Jon Ronson.  His books include The Psychopath Test: A Journey Through the Madness Industry and Them: Adventures with Extremists.