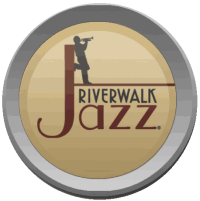 Every Sunday morning at 7:00 a.m. local time WBRH, one of our local public radio stations (which will soon be on the internet), airs a syndicated music program called Riverwalk Jazz. It features The Jim Cullum Jazz Band and is recorded at a club called The Landing in San Antonio, Texas. In an unlikely alliance the program is associated with Stanford University in California.

Each program is built around a particular theme. While many of the programs are jazz oriented, others are concerned with music of the big band era. The archived programs include “Hollywood Jazz: Music from the Movies,” “Kansas City Big Blues,” “At the Jazz Band Ball: Interview with Jazz Journalist Nat Hentoff,” “Cole Porter & Irving Berlin: Music Made in America,” “Over the Rainbow: The Music of Harold Arlen,” “Goodman, Shaw, and Dorsey: Big Band Leaders and Their Small Combos,” and “If Beale Street Could Talk: The Life and Times of W. C. Handy.”

As the titles indicate, the programs are much more than simply a series of musical numbers. They are also a history of the first half of the last century as told through the music of the times. Each show features a storyline about and quotes by the featured musician(s). You also get snippets of original recordings and interviews (where available) of the great musicians of the past and the people who knew them. The script (essentially an essay about the times) for each program is available at the show’s website along with photos associated with the programs. 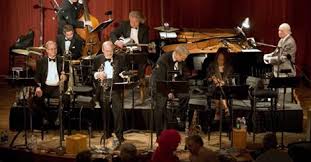 Riverwalk Jazz first aired on Memorial Day Weekend in 1989, so you can imagine the vast number of topics it has covered and the number of great musicians who have appeared on the shows. There are 375 or so archived programs at the Riverwalk Jazz website, but you can’t choose a particular program that interests you due to copyright limitations. “Due to copyright restrictions,” we are informed, “we are unable to provide a jukebox-style program stream where the user selects individual radio shows. It’s like a box of chocolates. Drop in and discover what’s on the air.” Two streams of programs randomly present past programs 24 hours a day.

Many of the shows feature guest singers including Joe Williams, Nina Ferro, and Catherine Russell as well as instrumentalists such as bassist Milt Hinton, trumpeter Clark Terry, and the great pianist and arranger Dick Hyman (a frequent guest).

On the homepage you will see the names of the two streams of archived programs that are playing. Choose one by clicking on the play button (►), and you will join the program in progress. Then click on “Read more” to see the show’s playlist and the script. Along with the script there are many historic photographs.

Clicking on the “Songs” tab on the homepage will bring up a complete listing of the songs featured in the series and the number of programs on which each was used. Click on a song title to see who wrote it and to see a list of the programs on which it was played.

The “Guests” tab brings you to a list of the guests who have appeared on the show. Click on a name to get a biographical sketch of that person and to see the titles of some of the shows on which he/she appeared. 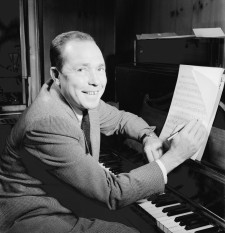 The “Bonus Content” tab brings up a list of photo galleries, audio clips, and vignettes related to the programs. The great songwriter Johnny Mercer, for example, is featured in a four-part interview with his friend the radio host Willis Conover. In the first three parts Conover throws out the titles of songs that Mercer was associated with and Mercer tells the stories behind the songs. In the final segment Mercer talks about other aspects of his life including his career as a singer. Fascinating!

The Riverwalk Jazz website is a wonderful place to listen to some well-performed music and to learn some history as well. Don’t miss it.

This entry was posted in Music. Bookmark the permalink.