During and after World War II, there was a program on the Armed Forces Radio Service (AFRS) that featured a young lady who called herself “G.I. Jill.”  She recorded 15 minute programs six days a week that featured big band and vocal selections and a little friendly chatter.  The programs were sent out via shortwave radio to G.I.s in Africa and parts of Europe, and transcribed onto records for distribution elsewhere in the world.

Though Jill did these shows for many years, she always seemed fresh, and enthusiastic, if a bit unpolished.  It was obvious that she wasn’t reading from a script because occasionally she would start talking, and find that she had backed herself into a verbal corner.  Rather than make a big thing of it, she would laugh at herself and move on.  The girl next door quality of her voice, and her obvious love for the G.I.s she was talking to and playing music for made her the most popular voice on the AFRS.  At the height of her popularity, she got one quarter of all the fan mail that was received by the AFRS.  Some say she was our answer to Tokyo Rose who did her best to demoralize our fighting troops in the Pacific.  Jill, on the other hand, reminded our guys of what they were fighting for.

Jill ended every broadcast the same way.  Since she was being heard at different times in different parts of the world, she would say, “Good morning to some of you, good afternoon to some more of you, and to the rest of you—good night.”  You can imagine how much our servicemen, thousands of mile away from home and their sweethearts, loved to hear her mellifluous voice wishing them “good night.” 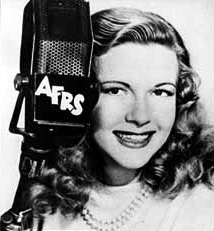 “Jill” was actually Martha Wilkerson (1918-1999), a pretty, young mother who worked for the Office of War Information.  She started out doing a radio show with her husband, Mort Werner,” but later became a solo performer – much to the pleasure of the servicemen who loved her.  I have been unable to find out much more about her than the above, but she did as much as anyone to bolster the morale of our fighting men during and after World War II, and certainly deserves to be remembered.

Below you will find one of her typical broadcasts.  It’s probably from late-1948 since it contains a song that was featured in the movie Easter Parade which was released in June of that year.  Jill starts with a number by her favorite performer, Benny Goodman, who she often referred to simply as “BG.”

This entry was posted in Music. Bookmark the permalink.